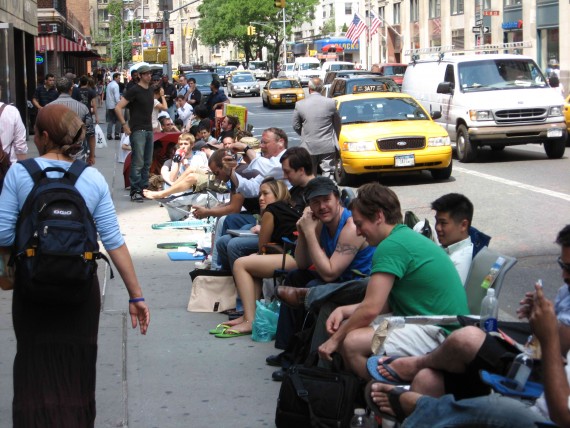 A long queue outside an Apple store in NYC(Photo : Padraic Ryan)

Long line of shoppers appear outside apple stores as the bigger-screen iPhone 6 and iPhone 6 Plus were made available on Thursday in Australia, Hong Kong, Singapore, and Japan.

For the past two days, there are also long lines outside stores in New York and San Francisco. Consumers queued early to be the first ones to buy the latest Apple gadget. Soon, it will roll out in Germany, France, Puerto Rico, U.S. and Canada.

The line outside the Apple store in Sidney reaches up to more than three blocks. One of the consumers lined up for more than 11 hours. Despite arriving early.was shocked to learn than she's already the 800th person in the queue.

Angela Ahrendts, Apple senior vice president of retail and online stores, said in a tweet on Thursday, "Phenomenal start to a historic day and an honor to be with our incredible team and first customers in Sydney,"

First-day sales is an crucial event for the California-based company, and Apple CEO Tim Cook hopes that the new product will generate more sales for the company. iPhones already generate more than half of Apple's annual sales, amounting to $171 billion in revenue last year.

An analyst from BTIG LLC, said that that the buzz created in the first week of an Apple release generates favorable free press for the company. It has been gaining raves from consumers as shown by reservation for the first 24 hours reached 4 million.

Analysts predict good sales for the new line of product as questions arise whether the Apple inventory can satisfy the demand. Though sales may be lower than last year's iPhone 5s and 5c since the company decided to exclude China from the countries included in the opening weekend.

Old iPhone users are trading in their smartphones for the new model, and 26 percent of a surveyed 6,000 consumers said they'll be first time iPhone users.