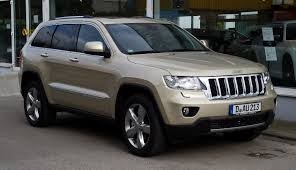 Chrysler will recall around 189,000 Dodge Durangos and Jeep Grand Cherokees in United States to resolve fuel pump issue that an stall the SUVs.

However, a believer of safety precaution stated that the recall is not suffice to cover other models, it can affect other products.

The recall, announced by the National Highway Traffic Safety Administration, includes other 2011 models. The brand stated that the relay can cause danger of crashing. However, the organization claimed that as of 25th of August, they had no reports of such issues.

This problem has been there since October of 2013 due to the heat. The cars might not work and the fuel pump can still work even when the vehicle is turned off.

The fuel pumps will be replaced by the dealers beginning on 24th of October. The Center of Auto Safety said that the recall is not enough since there are over 5 million other Chrysler SUVs that use similar fuel pump that are present on Durango and Cherokee.

As stated in the petition, the organization argued that some parts being installed on Chrysler's millions of cars starting 2007 can malfunction and can cause to stuck in traffic or perhaps turnoff devices that are powered by electricity.

According to the safety team, there were 70 complainants who raised such concerns and even the government is aware of such issues, in fact they got over hundred similar complaints.

NHTSA still has not make any action regarding this matter. The vehicle brand is going through investigation on the complaints and gathering parts from the cars for further study.

Vehicle owners and other groups can request to investigate concerns that need recalls. The Center for Auto Safety has done this petition on NHTSA few years ago, which included a notable incident that asked to recall 1.56 million previous Jeep SUVs which used fuel tanks installed at the back of rear axles. The organization raised an argument on the tanks that leak fuel and can lead to fire crashes.