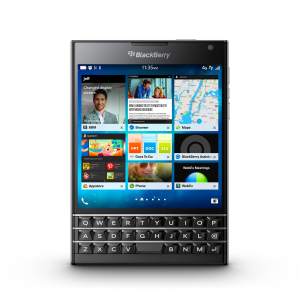 In the event, Chen teased the audience by first taking out a Canadian passport from his jacket pocket, then pulling out the Blackberry passport. The CEO said it's essential to compare the sizes of the two items so people won't be daunted by the size.

"It's a size that can fit in a gentleman's pocket... and a lady's purse," said Chen

According to the CEO, the square smartphone is designed with an actual passport in mind to create the sense of familiarity when holding the phone. The head of product and brand marketing at BlackBerry Jeff Gadway said that the 4.5-inch square screen can benefit business people, the target audience of the product, with its functionality.

The screen can show 60 characters in one line and it's wide enough for people on the go to view and edit documents using the phone. While many brands are going for narrow phone, the Passport is all about going wide, said Gadway.

The Blackberry Passport has a 1:1 aspect ratio and the beloved qwerty keyboard, which doubles as a touch pad. It also comes with an impressive audio and a 30-hour battery life. It's also made of Gorilla Glass for a sturdier handset. Along with the Passport is the Siri-like personal assistant called BlackBerry Assistant. It helps users manage commands and text and call using the owner's voice.

Blackberry Passport is far from the stylish phones being offered by Apple and Samsung, but as Daniel Thomas, a Telecom correspondent, said, the phone is functional and targets "chaps in suits" as their market.