Microsoft Introduces Windows 10 To Be Released Next Spring 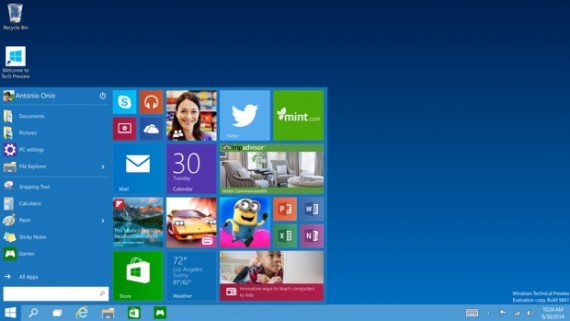 A preview of Windows 10(Photo : Microsoft)

Microsoft offers the first look into their new flagship operating system Windows 10. The tech company skipped version 9 to emphasize their point of unifying the OS for desktop and mobile.

In the San Francisco event held Tuesday, Terry Myerson introduces the new operating system Windows 10 that will be released next year. However, the company already considers the success of Windows 10 crucial for Microsoft and its new CEO Satya Nadella. The disregard of Window's trademark naming of operating systems to point towards the company's major advance.

Microsoft executive Joe Belfiore who oversees the conception of Windows 10 said that the new operating system will bring together the familiarity of version 7 and the innovative benefits of Windows 8.

Windows 10 takes a few steps back as Microsoft considers the concern of users. Two years ago, the version 8 alienated many old PC users, and to accommodate them, Windows decided to bring back the start menu while also gluing next to it the tile-shaped menus introduced in Windows 8. It was reported that only 20% of business organizations switched to Windows 8.

A first look at #Windows10: http://t.co/rRxbwEiIbB

Myerson expects millions of corporate-technology buyers starting Wednesday to download an early version of Windows 10 and provide feedback on how Microsoft can further improve the software. It can be the biggest crowdsourcing project worldwide as nine out of ten computers bought run on Windows. The unusually early release of the early version of Windows 10 will allow Microsoft to solicit insightful feedback from corporate users.

"Together with the feedback you'll provide us, we believe we can build a product that all of us will love," Myerson said.