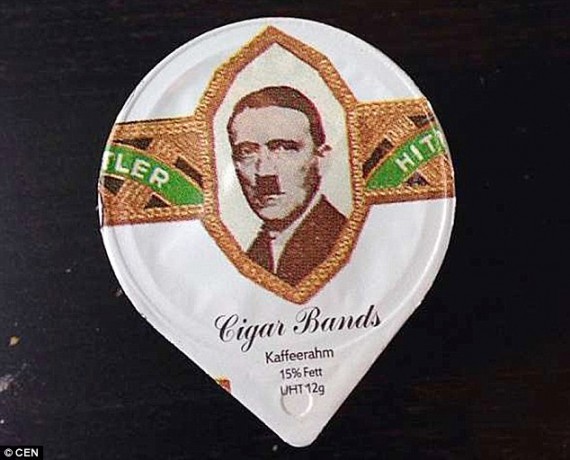 A Swiss Coffee company apologizes and pulls out novelty coffee creamer lids with the image of Nazi dictator Adolf Hitler and Dictator Benito Mussolini after an uproar from German businessmen.

A group of Germans noticed the coffee creamer lids showing the faces of Hitler and Mussolini while having coffee in the city of Coire, in the eastern region of Graubunden.

The faces of the German dictators were printed inside a gold frame atop a plastic packaging and distributed by Migros, Switzerland's largest supermarket chain as well as in a takeaway food kiosk in Switzerland's northern Aargau region.

"Our Swiss colleagues took us down to the coffee shop and when the waitress brought them over we saw the face of Hitler staring up at us from one of the cream containers,
Germany-based Christian Shuster said in a statement in Daily Mail.

"I couldn't believe it and fist thought it was some sort of sick joke being played by my colleagues. But then we saw the other containers also had the face of Hitler on and some had Mussolini-This is just absolutely evil and outrageous," Shuster added.

Meanwhile, a  kiosk owner expressed his disbelief and confusion regarding the issue, "To be honest, I hadn't even looked at them so when people started complaining, I  wasn't sure what they were talking about-but then I looked, and yes, was pretty shocked too," Albert Emi said.

Migros immediately apologized for the rather "inexcusable" and unforgivable" mishap and decided to stop getting supplies from Karo-Versand, the company that made the packaging.

The unfortunate event started when ELSA, a Migros subsidiary was asked by an outside company to supply set of 55 coffee creamer containers.

Normally the Migros put innocent images on the containers and reiterated that the outside company was the one that provided the problematic designs.

"I can't tell you how these labels got past our controls. Usually the labels have pleasant images like trains, landscapes and dogs-nothing polemic that can pose a problem," Tristan Cerf, spokesman for Migros said.