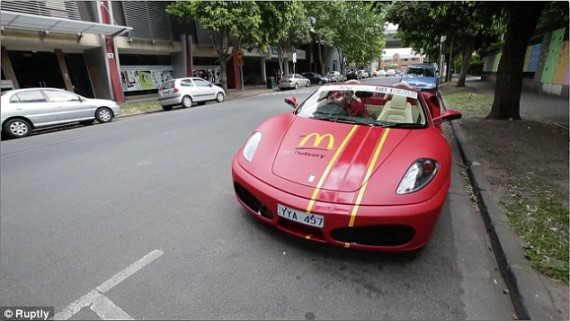 Maccas, as the Aussies call the burger chain, uses Lamborghini and Ferrari as the two luxury cars to market their delivery service. McDonald's choice of delivery car Ferrari F430 Spider first appeared online a couple of weeks ago. There's a booming response as the brand plans to implement the same scheme in other stores in Brisbane.

The home delivery trial started in Southern Melbourne in July. 20 more restaurants in Brisbane will follow the test campaign in November and December. About seven stores in Sydney and three in Melbourne have already joined the trial.

The Lamborghini McDelivery car has the golder arches logo emblazoned on it. However, there is no information provided on how many sports cars are being used in this experiment.

Using the Ferrari or Lambhorgini as the deliver comes with a price of $5. A minimum order worth $25 from participating locations is also necessary. Most of the menu items are available for delivery, including their signature Big Mac and french fries.

The marketing scheme has attracted enough attention, as people are always seen taking photos of the white Lambhorgini and red Ferrari parked in the Melbourne branch of McDonald's.

For the past few months, McDonald's is actively trying to promote their brand and market their healthier menu option. After a series of controversies, including the China food security scandal and an increase in valuable competitors, the burger chain's global revenue dropped about 30 percent, as measured in the September 30 closing.

McDonald's Australia also recently started the pop-up store shared like a Happy Meal. The pop-up store, dubbed as the world's largest lunch box, is located at the Federation Square in Melbourne. They gave away free Steak Taster's on Wednesday.

Maccas arrived in Sydney, Australia in 1971 and has expanded ever since.