Dunkin’ Donuts to launch a ‘Croissant Donut,’ not a ‘Cronut’ 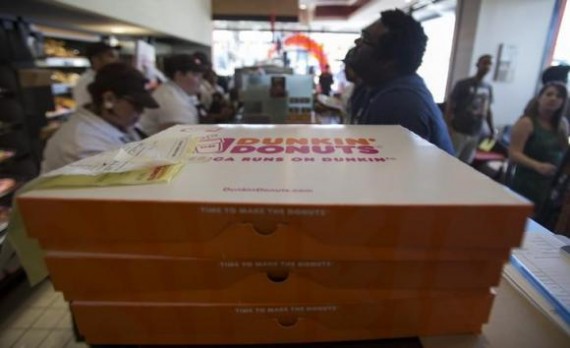 Dunkin' Donuts announced it plans to roll out a croissant-doughnut hybrid in the United States next week on Nov.3.

The brand describes the Croissant Donut as "a delicate and flaky croissant ring that is glazed like a donut."

"The Croissant Donut has 24 layers of buttery dough and is covered with the same sweet distinctive glaze used on our Glazed Donuts, creating the ultimate pastry that is crisp on the outside and soft and flaky on the inside," said Jeff Miller, Dunkin' Brands executive chef and vice president of culinary innovation in a statement in LA Times.

Customers can avail of the Croissant Donut at all Dunkin' Donuts branches across the country. However, it will only be limited amount for $2.49 and will be packed in an ornate, white gift box especially designed to hold individual Croissant Donuts.

Dunkin Donuts reported lower-than-expected sales in the most recent quarter due to increased competition from many breakfast chains across the country including Taco Bell.

John Costello, Dunkin Donuts president of global marketing and innovation, said in a phone interview that bakers have been creating and experimenting on mixes of doughnuts and croissants for the past 20 years. He said that the company's decision comes after trends and "combinations" have been studied by the company.

"Are we copying a specific bakery in New York? The answer is no," Costello firmly stated.

Dominique Ansel coined the term "Cronut" more than a year ago and it became his bakery's trademark. Imitations later arrived, including Hans Rockenwagner's "Cro-Dough," Semi Sweet Bakery's "Crullant" which is a cruller-croissant hybrid, and ConfeXion Cupcakes + Cakes' "Briougnut," a brioche doughnut.

As for Ansel, he released a statement to Fox News regarding the issue. "From our understanding, Dunkin Donuts item is called a 'croissant doughnut'. This is not an infringement on our trademark for CronutTM. There is a difference between any burger and the Big Mac; and any soda from Coke. And we appreciate large corporations that respect trademarks from small businesses, and distinguish their products appropriately to avoid customer confusion."