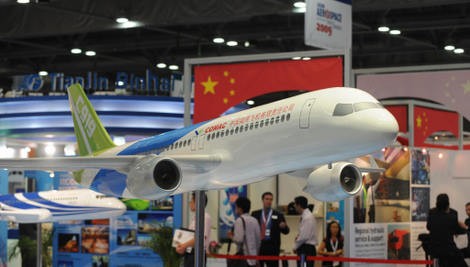 Commercial Aircraft Corp. of China Ltd. gets new orders for its C919, the nation's first large passenger jet-in an effort to compete with Airbus Group NV and Boeing Co.'s hold in the aircraft industry.

The aircraft company, also known as Comac, is owned by the Chinese government and sealed the deal with China Merchants Bank Ltd.'s leasing unit. Comac currently has 430 orders from 17 different customers for their 168-seater C919 passenger jet, as well as 23 additional orders for its ARJ21-700s.

"This will help the development of Chinese civil aviation," Comac's Chief Financial Officer Tian Min said in the statement.

The orders will boost the sales of Shanghai-based Comac's C919 passenger jets in order to lure Chinese buyers, whose orders have helped mask a shortage of overseas orders.

Two rival aircraft companies and currently the biggest contenders in the aircraft industry, Chicago-based Boeing Co. and Airbus and both expect China's economic boom to help the country become the world's largest market for passenger planes by taking over the aircraft planes in the U.S. in two decades.

As of the moment, GE Capital Aviation Services is the only confirmed foreign customer for the C919.

According to GE's signed a letter of intent, it plans to buy as many as 10 C919s at the Zhuhai Airshow in 2010. Fairfield, Connecticut-based GE will also supply engines for the aircraft through CFM International along with Safran SA.

The C919's first flight, which was previously scheduled for this year, is now set for 2015. The planes will be delivered in 2018, a two-year delay since the initial agreement was to deliver the planes by 2016.

Meanwhile, Comac aims to finish the full assembly of the C919 by August 2015 and conduct the first test flight by the end of next year, Yu Zemin, deputy general manager of COMAC Shanghai Aircraft Manufacturing Co., said at a conference in Shanghai in September.