Sony pulled out a PS Vita Ad after receiving backlash from viewers saying the video is sexist and just another blatant attempt to "fan service" teen males.

Different media outlets had different called the ad different names. Forbes called the ad, "lame," Business Insider dubbed it as "blatantly sexist," while Jezebel took it up a notch and called it "stupidly sexist."

The ad may be offensive to the 48 percent of females who play video games, according to Sony's marketing team, the Entertainment Software Association.

The commercial grabbed headlines in social media, and people couldn't stop talking about it.

The negative feedback prompted Sony to remove the commercial on YouTube, though a third party already reposted it so that people could see the ad for themselves.

Seems like Sony, especially PS Vita's marketing team has not learned its lesson since back in 2010, it already received negative criticism about a print ad that showed a picture of a woman with breasts on both sides of her torso, which was to promote the PS Vita's double side touch feature. The ad had a caption that read," Touch both sides for added enjoyment." 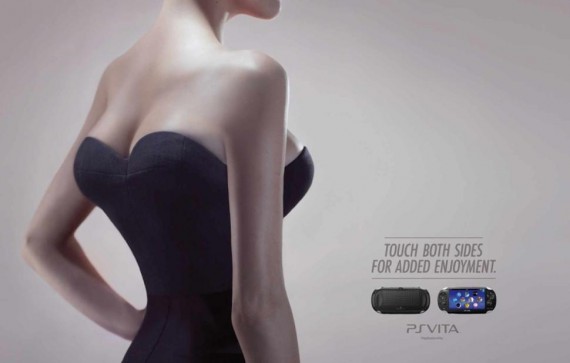 Sony is no stranger to cringe-worthy advertising and apparently this sexual innuendo thing is a "staple" for Sony, so to speak, as previoiusly, the company also advertised "Guitar Hero:World Tour" with supermodel Heidi Klum Lingerie.