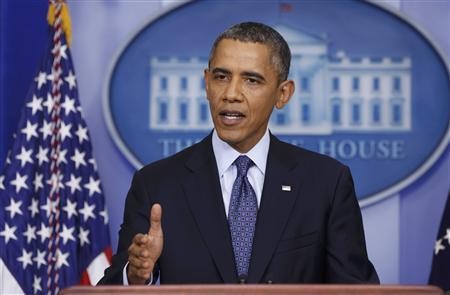 The U.S. administration has a little over a month to fix the technology problems crippling its online health insurance marketplace, or jeopardize the goal of signing up millions of Americans in time for benefits under President Barack Obama's healthcare law, experts said on Thursday.

Problems with the federal marketplace's entry portal serving 36 states, the website Healthcare.gov, continued for a 10th day on Thursday despite signs of gradual improvement, keeping a brake on the ability of consumers to shop for federally subsidized health coverage.

Poor turnout in enrollment would provide further ammunition for Republican foes of Obamacare, whose efforts to kill the law have culminated in a federal government shutdown that began on October 1, coinciding with the launch of the health insurance exchanges nationwide.

Already on Thursday, Republican lawmakers in Congress launched a new investigation into the technical glitches, sending letters to U.S. Health and Human Services Secretary Kathleen Sebelius and two of the website's contractors, asking for details on what is causing the failures and any system changes or testing that had been performed.

Up to 7 million Americans are expected to enroll in health plans for 2014 under the law, formally known as the Patient Protection and Affordable Care Act. Insurance executives, policy experts and former administration officials said the federal government's technical problems need to be largely sorted out by mid-November.

That would help ensure that large numbers of enrollees - especially healthy young adults needed to make the program work financially - can be processed by a December 15 deadline for January 1 coverage.

"Mid-November would be a time where folks who are getting online or accessing in other ways should really see things move pretty efficiently," Dan Hilferty, chief executive of Philadelphia-based Independence Blue Cross, said in an interview. "As we get closer to January 1, if in fact some of these glitches are not fixed, then I think people will become more and more concerned, and maybe panic about it."

"We have a strong team in place, including external contractors, who are working around the clock to improve Healthcare.gov. We have a plan in place and are making progress, but we will not stop until the doors to Healthcare.gov are wide open," HHS spokeswoman Joanne Peters said in a statement on Thursday.

Healthcare.gov is the entry site for consumers in states that have chosen not to build their own healthcare exchanges. The website was hobbled within minutes of its launch on October 1. HHS attributed the crash to an unexpected surge of millions of interested consumers seeking information on the new benefits, and said it was working to address capacity and software problems to quickly fix the problem.

"There have been a lot of server issues, so I haven't been able to get through," said Ira Barth, 24, a part-time classical music singer in Dover, New Jersey, whose exchange relies on the government site. "Right now for me it's actually cheaper to visit the doctor without having insurance. I want to see how affordable it is right now."

Sebelius told a gathering in Pittsburgh, Pennsylvania, on Thursday that 13 million people have tried to visit Healthcare.gov so far this month in what she called "a sign of great need."

Joe Bourgart, 55, of Murrysville, Pennsylvania, attended the event that was co-hosted by the Pittsburgh Steelers football team, where he was able to register on Healthcare.gov for the first time.

"You have to do something about this," Bourgart said to Sebelius as she walked by, referring to the website problems. "I promise I will," she responded.

Bourgart, who identified himself as a Republican and a supporter of universal healthcare for Americans, said "whether this is the right way to do it, I can't say. But I do think you have to try things before you can say if they work or not."

"I feel like unfortunately the whole government shutdown issue has put this issue to the sidelines while everyone is focused on the mess in Washington," he added. "I am very disappointed in my party at the moment."

The House of Representatives Energy and Commerce Committee, in its letters to Sebelius and contractors CGI and Quality Software Services Inc, questioned the nature of the glitches against testimony from federal officials and company representatives ahead of Healthcare.gov's launch on October 1.

"Despite the widespread belief that the administration was not ready for the health law's October 1 launch, top officials and lead IT contractors looked us in the eye and assured us all systems were a go," said committee chairman Fred Upton, a Republican from Michigan. "The American people deserve to know what caused this mess."

CGI said it would cooperate with the committee's request. Officials at QSSI were not immediately available for comment.

Patience has also begun to run thin among Democrats who worry that the administration is not acting decisively enough.

"They don't seem to be addressing these problems quickly enough. They've had three years to get their ducks in a row. It gets to the point where it becomes inexcusable. And we're not at that point yet. But we're getting close to it," said a senior Democratic aide in Congress.

"With the amount of support the president and the White House have from Silicon Valley, you would think they'd be able to nip these problems in the bud. They could call up any of these people and ask for their assistance. Why not put together a blue ribbon panel with all the guys from Google and Twitter? This should have been done beforehand."

"They need a geek squad, not a firing squad," Markey told reporters about the administration's IT challenges.