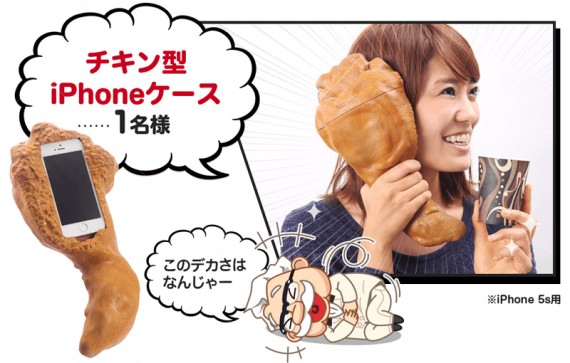 In the promotional poster for the iPhone 5s case, the illustration of Colonel Sanders laughing on the floor, as if mocking the item by saying, "Why is it so big?" The case is larger than the girl's head, completely engulfing the iPhone.

The fried-chicken pillow is equally big as it's designed for a person to insert their head inside the pillow and to use it while napping on their desk job. The poster showcases an employee napping at work.

It's not something that can be bought in KFC, because the fast food chain is giving it away in a raffle. To enter, participants needs to follow the Twitter account and tweet with a link to the promotional page and with the hashtag "#KFCカーナルズデー" ("KFC Colonel's Day).

As part of the promotion, KFC Japan has previously unveiled fried-chicken computer accessories such as the keyboard, mouse, and USB that showcases the chain's famous fried chicken.

Kentucky Fried Chicken enjoys a considerable popularity in Japan. A bucket of KFC fried chicken has been part of the Japanese' Christmas tradition since 1974 when the company started advertising fried chicken for Christmas. It's only in Japan that KFC has special Christmas meal called the "Party Barrel" which includes chicken salad and a cake. People order the meal months in advanced to avoid long lines during Christmas that can last for up to two hours.

Japan is known for adapting foreign ideas such as Christmas to fit their local customs and traditions.