Andy Samberg Teams Up With Umami Burger To Create The Samburger 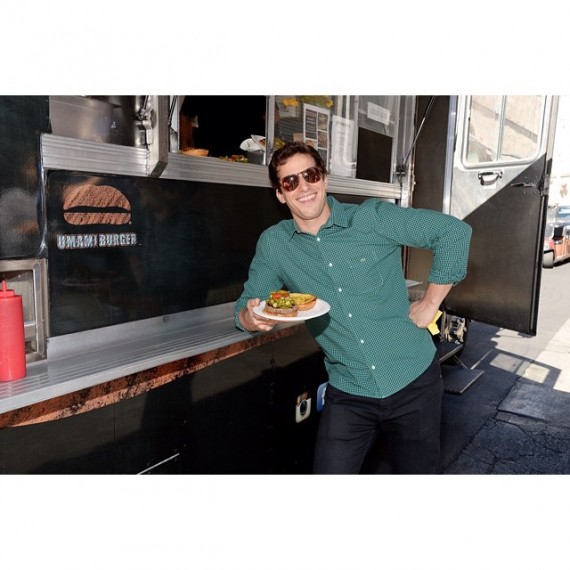 Andy Samberg posing with The Samberger

As part of Umami Burger's Artist Series, comedian Andy Samberg teams up with the store to come up with The Samberger.

$1 of every sold The Samberger will go to The Center for Early Intervention of Deafness in Berkeley, California as part of the restaurant's project. According to their Facebook, the Samberger has the "signature beef patty topped with sport peppers, roasted tomatoes, chopped umami dill pickles, a kombu relish, roasted garlic aioli, poppy seeds and yellow mustard" with the Umami Burger's signature bun.

Though Samberg has no connection to Chicago, he derives the inspiration for the burger for his love for Chicago-style hots dogs.

The Brooklyn Nine-Nine star said in a press release, "I worked tirelessly 'munchin around' with the Umami Burger team to design a burger that would best represent everything I stand for." He jokingly said the Chicago Hot Dog-themed burger has nothing to do with him, but since it tasted good, they went with it.

Umami's Artist Series aims to collaborate with artists to create a specially unique burger and to donate a part of the proceeds to the artist's chosen organization.

In the past, Top Chef champion Michael Voltaggio created the Monte Cristo Burger made of beef patty topped with Gruyere and prosciutto in a deep-fried bun that's soaked in vanilla custard. The $15 buger experienced a limited run in Umami's outposts in New York and Florida.

Other artists who have participated in the Artist Series includes The Black Keys with the Black Keys Akron Burger with velveeta fondue, whose proceeds went to The Black Keys Alfred McMoore Memorial Endowment Fund, and Jose Andres with a burger named after him that features pork and ham patty, piquillo pepper confit, caramelized onion, manchego cheese, and aioli.

The Samberger will be sold starting from September 23, 2014 for $13 in select Umami Burgers stores nationwide.