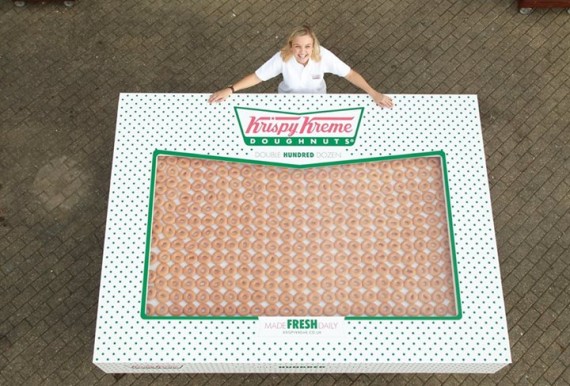 Dubbed Double Hundred Dozen box of doughnuts, it's meant for large-scale events as the box measuring 11.5 feet by 3 feet requires eight employees to carry. The box is part of Krispy Kreme UK's Occasions offering, a line of doughnut packages that are meant for big events catering to dozens of people

If the box is too much for customers, they have the option of choosing among the dozen boxes and doughnut towers. The 'Occasions' line targets events such as weddings, birthdays, office parties, and bar mitzvahs. While the other entries in the 'Occasions' lineup are customizable, the Double Hundred Dozen are strictly honey-glazed doughnuts only. The price of Double Hundred Dozen isn't listed on the website.

"Whether you need a pick-me-up for your staff, catering for an event or even a wedding cake tower, Krispy Kreme offer the ideal solution to mark every occasion," said Judith Denby, Krispy Kreme UK's chief marketing officer. Denby said it's a great way to make fans of Krispy Kreme get excited for events.

On the 16th, Krispy Kreme held a contest on Twitter for one lucky office to win a box of Double Hundred Dozen. All participants had to do was get the entire office to tweet about their upcoming event with the hashtag #BigOccasion and mention @KrispyKremeUK. The office with the most number of tweets win the contest.

Krispy Kreme announced the winner on Friday with a creative tweet of a photo of doughnuts forming the company name. 360 Resourcing, an England-based company providing resourcing solutions throughout UK, won the event. They received the 2,400 doughnuts to celebrate the company's fifth birthday.

Early next month, the doughnut retailer will start selling their Halloween-inspired collection of doughnuts.