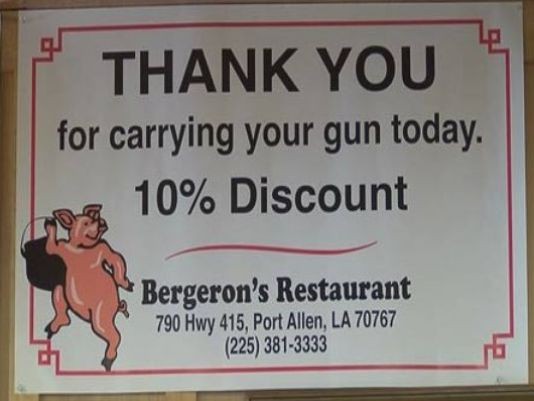 The restaurant sign giving the 10% discount to gun carriers(Photo : WAFB)

A Louisiana restaurant gives 10 percent discount to patrons who come in carrying guns.

This year, numerous national chains such as Chipotle and Target have banned guns inside their store. A couple of weeks ago, the Louisiana-based Bergeron's Restaurant specializing in cajun began offering 10% off on meals for customers carrying guns.

Owner Kevin Cox started the idea to encourage police enforcement officers to visit the restaurant but has soon expanded the promo to civilians after other customers asked if they can also avail the discount. Cox said that it's not a gun-free zone and as long as everyone's carrying a gun, they're all the same size.

The owner said that there are areas targeting gun owners and banning guns all together. Cox took a different approach and encourage gun carriers to dine at his place. Cox wondered how he could make his restaurant safe.

"And I realized that we have a lot of good people that carry a firearm in Louisiana -- my cousins and relatives included -- and I'm equally as safe when they're here, and I need to encourage that," said Cox. If people would enter the restaurant known for its cajun cooking to cause trouble, Cox said that they're not defenseless.

In an interview with NBC 33 TV, Cox said that they're serving good cajun food, "with a side of second amendment rights."

Though the internet is at war about the issue, business has boomed for the cajun restaurant since the controversial marketing ploy has been reported by different media outlets. Customers from around the region are dropping by to support the restaurant. Cos said he gives out 15 to 20 discounts everyday.

Only customers who bring their guns with them are eligible to avail the discount. "I just need to see a weapon. I need you to be carrying a gun," said Cox.