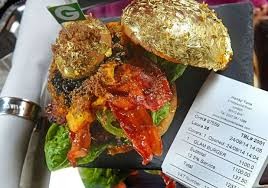 A restaurant in London has made the world's most high-end burger that has caviar and tiny bits of leaf of gold, as described by the company that follows the record setting.

The American restaurant, Honky Tonk, introduced the most expensive Glamburger worth $1,770. This gain a world record and verified by the company, Record Setter.

The burger was made by Chef Chris Large which used Kobe Wagyu beef and venison from New Zealand. The patty weighed 280 grams that was seasoned with salt from Himalayan. It also has a black truffle brie in the middle which melts when it is cooked.

The streaky bacon was coated with maple syrup and the lobster was poached in Iranian saffron-all included in the ingredients. The hickory smoked egg of duck covered in gold leaf and Beluga caviar are also in the list. The bun is as well covered with gold leaf and used Japanese matcha and cream mayonnaise for seasoning.

The chef added a champagne jus, mango and white truffle that is grated.

"After searching and gathering all the perfect ingredients to make this masterpiece, the customer will definitely have an unforgettable dinner of his life," as Large bragged in his press release.

Groupon, together with Honky Tonk, worked together to feature the Glamburger and celebrate its fifth million food and drink voucher which will be sold in the site. One person will experience an unforgettable meal in his life when he gets this voucher. The winner will have the chance to eat the burger free of charge.