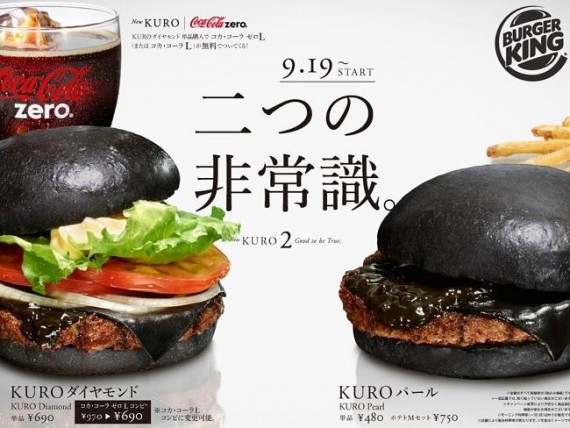 Burger King joins the absurdity in Japan and introduces a burger with black bun, black cheese, and blank ink to top it all off.

To make cheese and the bun turn black, they smoked it with bamboo charcoal to achieve the color. As for the ink, it's made of onion, garlic and squid ink. The beef patties also contain black peppers.

They first launched the Premium Kuro Burger (kuro means black) in 2012, also using black buns and combining the squid ink with ketchup. Last year, they released the Kuro Ninja which also had black buns and squid ink sauce with an additional bacon. They'll release later this month the third generation of black-bun burgers.

This time, Burger King offers two varieties of the Kuro burger. The more basic Kuro Pearl is served with the black bun, cheese and ink, while the Kuro Diamond comes with tomato, lettuce, onion, mayonnaise and other usual burger ingredients.

Burger King isn't the first one to choose the black concept for their burgers. McDonald's released a yin and yang burger in China, and French fast food chain Quick had the two-tiered Dark Vader Burger, which also had black buns and paid tribute to the movie Star Wars.

There's already a favorable response on the company's facebook page.