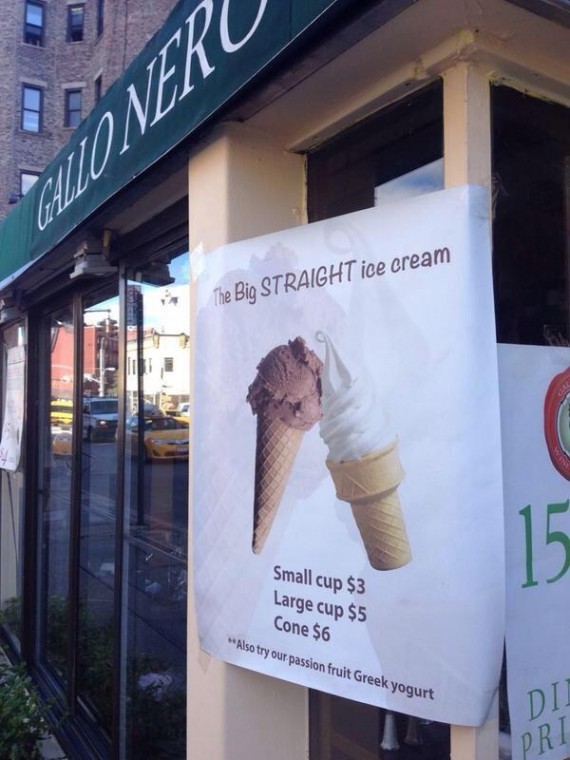 Gallo Nero, a restaurant in New York's West Village, raised eyebrows when they advertised their latest product with the words "The Big Straight Ice Cream." The poster was hung in front of the store, just right across the ice cream parlor Big Gay Ice Cream.

Owners of the ice cream parlor posted on Twitter a photo of the poster and said, "If you pass by @galloneronyc maybe you could pop in & let em know what you think of this advertising campaign."

Patrons responded saying the poster seemed mean-spirited and homophobic. Bloggers and the community where the two stores belong to deem the sign as tacky and disrespectful. The manager of the Italian restaurant said he sees no problem with the sign. "What's the issue? We can call our ice cream whatever we want," said Nero.

Besim Kujak, owner of Gallo Nero and several restaurants in NYC, apologized to the two owners of Big Gay Ice Cream and took down the sign. Kujak said that it's just a misunderstanding between the chef and the people.

"I support the gay community. I have nothing against anyone, you know? We're all human. Black, white, gay, straight, it has nothing to do with anything," said Kujak.

Co-owners of Big Gay Ice Cream, Douglas Quint and Bryan Petroff, released a statement setting aside blame on the Italian resto. They said that the poster is meant to attract attention and it certainly attracted theirs. They posted a photo to let the general public decide what the poster possibly meant. The co-owners said that they didn't want it to spark any controversy or to start any wars.

"Do we think the folks at Gallo Nero intended to be malicious? No. Do we think their sign was ill-advised or possibly in poor taste? Sure, but as business owners we're not going to dictate to other business owners as to how they should operate, nor would we want to censor anyone," they said in the statement.

On Thursday, Big Gay Ice Cream posted a food spread delivered to them by Gallo Nero, showing that the two restaurants have resolved the issue.

"Big Straight Ice Cream" just sent over a spread and we're devouring it. NOW can everyone STFU? pic.twitter.com/M3AaYC4iP3