Thai Police Believe That ‘Network’ Was Responsible For Bombing In Bangkok 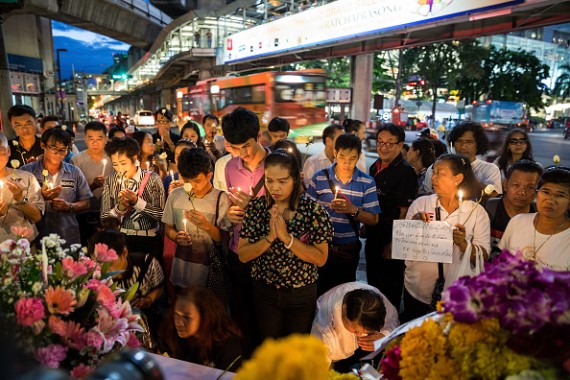 At least 20 people were killed in Monday’s bombing in Bangkok, in which 11 foreigners from several Asian countries died and more than 120 were wounded, according to Reuters.

A sketch of the “unidentified foreign man” they believed carried out the bombing was released on Wednesday, according to USA Today.

“He didn’t do it alone, for sure. It’s a network,” national police chief Somyot Poompanmoung said at a news conference, referring to the main suspect.

“Hopefully he is still in Thailand.”

Authorities reportedly released surveillance video images of the man they believe to be the bomber wearing a yellow T-shirt and leaving a backpack under a bench just before the bombing on Monday. Thai police reportedly called in two or three people thus far.

Most of those that have been questioned were foreigners, according to the AP.

“He had white skin and must have been a European or have mixed blood, perhaps with Middle Eastern blood,” police spokesman Prawut Thawornsiri stated.

Prawut reportedly tweeted that police were offering a 1 million baht ($28,100) reward for information leading to the arrest of the suspect. Police investigation was reportedly focusing on a motive of revenge by Uighur militants, after the Thai government deported Chinese Muslim immigrants to Beijing in July.

Prime Minister Prayuth Chan-o-cha reportedly dismissed the connection, stating that an Uighur group would have claimed responsibility for the attack.

“I have always said that what the government did was within the boundaries of the law and by international agreement,” Chan-o-cha told reporters.

“If we did not send them they would have been a burden to Thailand. I don’t want this issue raised.”