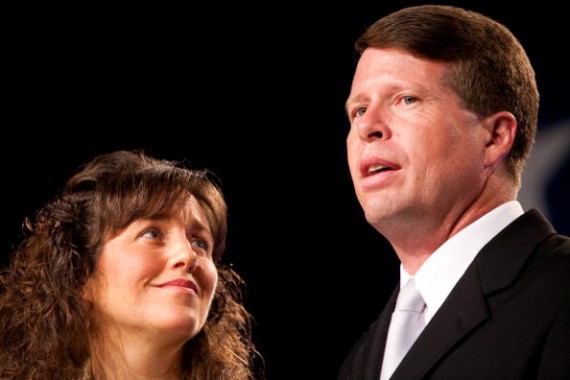 Josh Duggar entered a long-term rehabilitation program, leaving his wife, Anna Duggar, and their four kids to deal with the aftermath of the reveal of his double life, according to People.

Amidst the announcement that the former “19 and Counting” star entered rehab, details of Anna’s ultraconservative past and her current struggle have surfaced. The mother-of-four, who is one of eight, reportedly had a childhood as strict as the Duggars.

“Her parents are even a little more extreme,” a source for the entertainment website stated.

“Anna and her siblings were always taught that if you follow these 10 steps or whatever, God would bless you.”

Anna and her siblings were reportedly allowed to express their feelings only during the time that was allotted by their parents.

“They always got 15-minute, one-on-one sessions with their mom every week. That was the time to share their feelings, but other than that they had to keep their feelings to themselves,” explained the source.

Not being able to express her feelings must’ve been especially difficult when she reportedly met Josh at a Christian homeschooling convention back in 2006 when she was a teenager.

After Josh entered rehab, more allegations have come forth against him.

Adult film star Danica Dillon recently claimed that she had sex with the former reality television star on two separate occasions, allegedly while his wife was pregnant with the couple’s fourth child, according to ET Online. Josh reportedly approached Dillon at a strip club where she was performing in mid-March.

"He showed up and told her, 'I'm a fan. I've followed your work for years,' and then offered to pay her $600 for lap dances," In Touch magazine's Adriane Schwartz said.

“He then proceeded to ask her for sex and said he would pay her $1,500. She agreed, and he came to her hotel, and this was consensual sex, but everything turned violent and she was terrified of him."

Josh reportedly wasn’t true to his word, as he allegedly “dropped $1,000 on the table and walked out the door.”

"We are so deeply grieved by our son's decisions and actions," the couple said.

"His wrong choices have deeply hurt his precious wife and children."