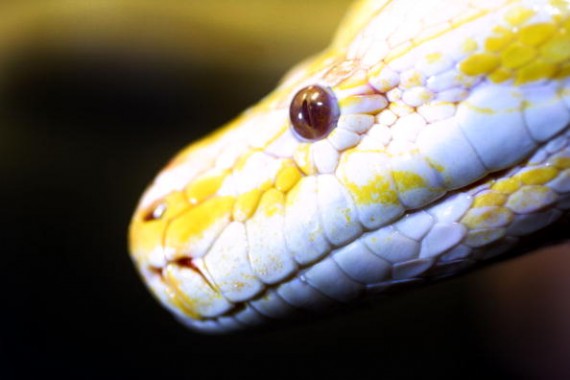 Medusa is a very special snake.

She is also the new object of Todd Ray’s affections as she is a rare two-headed albino snake that’s worth $50,000, according to The Huffington Post.

Ray, the owner of the Venice Beach Freakshow, reportedly had his eyes on Medusa for a while now.

"I've wanted her since the day it was born four years ago," Ray told The Huffington Post.

“I went back and forth with the owner and the price just kept getting higher."

Medusa was born in Florida and has since grown 3 feet from heads to tail, according to Softpedia. This is a rather large feat for an animal that has two heads because most creatures born with such abnormalities reportedly don’t live very long.

Apparently, Medusa is about to become a celebrity in her own right.

“This snake is perfect," explained Ray, who holds a Guinness World Record for having the biggest collection of two-headed animals.

“Some other two-headed snakes are beautiful, but they have a kink where the heads become one. Medusa doesn't. It's as if she was meant to have two heads.”


As perfect as Medusa is, Ray has had to be very careful when feeding the two heads as they get close to biting each other.

“I bring a mouse up to them and both opened their mouths,” stated Ray.

“Then the right head struck and yanked the mouse right out of my hand. Then the left head grabbed the mouse's butt end. I couldn't believe how quickly they were eating. They were going to meet in the middle -- and these types of snakes eat other snakes!"

Ray reportedly had to grab a knife and cut the mouse in half before the right head could swallow the left.

Medusa made her debut at the Venice Beach Freakshow over the weekend.

“I really think she is the star -- especially for snakes," he said.

“I wouldn't have spent that much money if she wasn't so valuable."