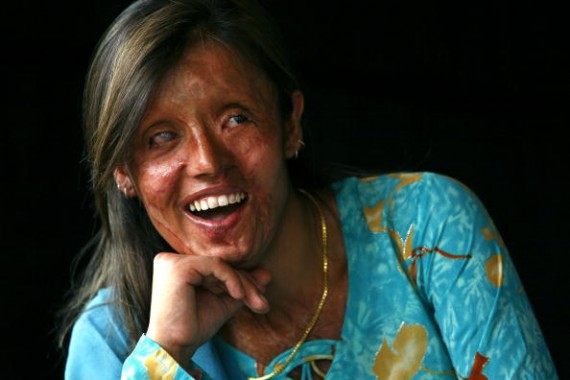 18-year-old Reshma Quereshi was visiting her sister in Allahabad, India when her sister’s estranged husband doused her in concentrated sulfuric acid, according to Upworthy.

The attack reportedly left Quereshi with severe disfigurement and the loss of her left eye, and the young woman is now bringing attention to the issue of acid attacks in India through a beauty tutorial that has gone viral.

In her video, Quereshi addresses the issue that buying concentrated acid is as easy as purchasing lipstick from the supermarket.

“This is the reason why, every day, a girl becomes a victim of an acid attack,” explained Quereshi.

The Supreme Court of India reportedly ordered a stop on the open sales of acid in 2013, but that hasn’t stopped the attacks. Police and the public have begun to take acid attacks much more seriously.

“Before, if there was an acid attack, police never took action,” explained Alok Dixit, founder of Stop Acid Attacks.

The majority of victims in acid attacks are reportedly women and girls. The attacks have been referred to as “gender-based violence that reflects and perpetuates the inequality of women in society.”

Through this recent video, Quereshi, along with Make Love Not Scars, the group that created the young woman’s video, are spreading a very important message.

“Beauty doesn’t lie in physical appearance but in being strong from inside,” Quereshi told People.