Genetically Modified Micro-Pigs Are Adorable, But Are They Dangerous? 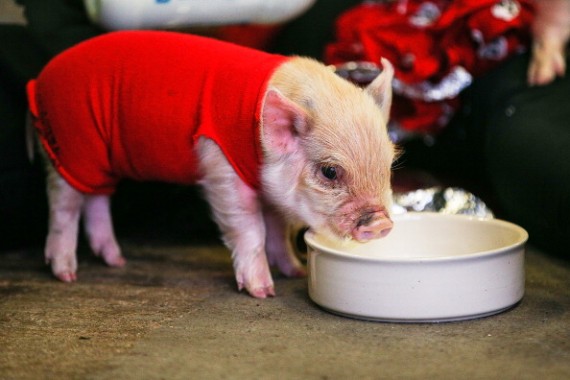 Scientists in China will be selling genetically modified micro-pigs as pets, selling the adorable creatures for $1,600 each, according to the publication ZME Science.

Despite how cute these animals are, experts remain concerned that this practice may actually be a dangerous one.

“Obviously, this has to be regulated," Yusuff Abdu, a researcher at New York University's School of Medicine, told Inverse.com.

“You can't let lab-engineered animals out into the public. There is a high chance they could get into the wild and offset an ecosystem if they happen to have an advantageous trait. Lab rats and mice are kept out of pet stores for this reason."

BGI, a genomics institute located in Shenzhen, alters the genomes of a Bama, which is an already small breed of pig, according to The Huffington Post. These pigs can reportedly weigh up to 100 pounds, but these lab-created micro-pigs only grow up to 30 pounds even after they’ve fully grown.

The institute has reportedly promised to offer miniature pigs in a variety of coat colors and patterns as well. The concern of whether altering every characteristic of a pig just so humans can find them more adorable has raised issue of whether this new practice is ethical.

Pigs also require very different care from dogs and cats. If these pigs are genetically modified for the sole purpose of being pets, they need to be taken care of by the right owner.

“Pigs are very intelligent animals and have fascinated pet owners for years.  Some 20-30 years ago miniature pigs (100+lbs) became a craze in the US,” explained Dr. Max Rothschild, Distinguished Professor in Agriculture and Life Sciences, Iowa State University.

“Unfortunately many owners were ill prepared to raise pigs as they lacked the husbandry and science knowledge to feed and care for them.  Many cities also had ordances against them. The new micro pigs produced by gene-editing are “cute” for some people.  They are still pigs and require that their owners have the knowledge to raise them properly.”