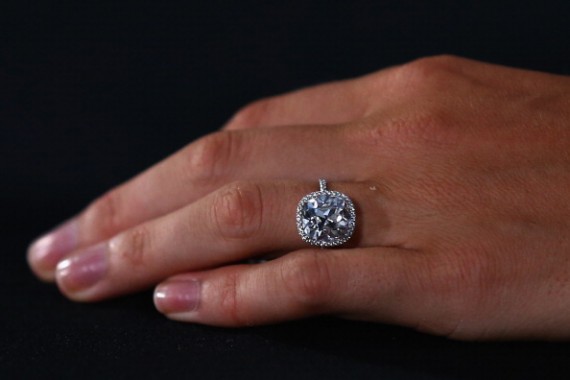 Carlee Leifkes and Lucas Unger have “never been the traditional couple.”

Now they have their engagement ring to prove it.

Leifkes has been stunning friends, family and strangers all around with her ring made from her partner’s wisdom tooth, according to the NY Daily News.

“So incredibly excited to marry my best friend, the man who knows that his wisdom tooth means more to me than a diamond," she wrote on Facebook.

When Unger proposed to Leifkes on Halloween, he gave her a wisdom tooth instead of a diamond, according to the U.K. publication The Metro. It seems that he made the right choice.

The process of getting the wisdom tooth was rather simple.

Unger’s father had reportedly saved his son’s wisdom tooth after he got them removed when he was younger. He was asked to mail one over for the special occasion.

“My birthstone is a diamond. I don’t need one to prove how much someone loves me. He’d already moved all the way from Canada to do that!”

The couple reportedly met a music festival in Canada earlier this year. They reportedly plan to marry later this month in a Las Vegas ceremony featuring an Elvis Presley lookalike.

Instead of #Diamonds This Woman Got an #EngagementRing Made From Her Fiancé's... Tooth: https://t.co/GIcR7IJzTU pic.twitter.com/kJSPkB3LJk

“What does a diamond signify in anybody’s relationship? I literally have my husband’s wisdom on my finger,” stated Leifkes.