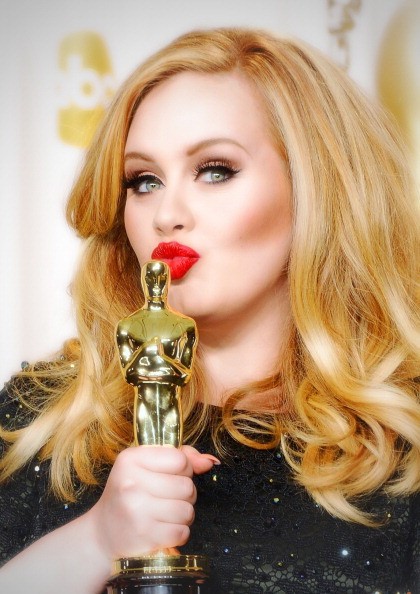 Despite being ever-so-private, Adele revealed a secret that the world is so happy to hear — she’s a fan of Drake.

The “25” hitmaker revealed that she is even interested in doing “an official remix” with Drake when the time comes, according to Rolling Stone.

“I love Drake. I love Drake so much,” said Adele on eTalk, a Canadian entertainment show.

The singer even celebrated the release of her single “Hello” with Drake’s “Hotline Bling.”

“I was off my face because I don't really drink anymore, and they've got video of me dancing to it on a coffee table," stated the “When We Were Young” singer.

Drake reportedly expressed interest in teaming up with Adele as well. He posted an animated picture of himself holding a cell phone while hanging out with the 27-year-old singer, according to NY Daily News.

Adele is such a fan of “Hotline Bling” that she purchased a coat worn in the song’s music video in order to fully embody all the song has to offer.

“I got it delivered the other day, I ordered it. The red one,” she said.

Adele has a lot to celebrate as of late.

“25” is set to break NSYNC’s one-week Nielsen-era U.S. album sales record of 2.42 million sold, according to industry forecasters. Sources stated that the album is also on track to sell at least 2.5 million in sales in its first week alone, and sold more than 900,000 copies alone through the iTunes stores on the first day of its release, according to Billboard.

Adele’s third album was met with high expectations. Even before its release, it was reported that the album shipped 3.6 million copies to retailers.

“This may be one of the biggest records in the history of our time,” stated Rick Ross, who recently released his own remix of Adele’s “Hello.”