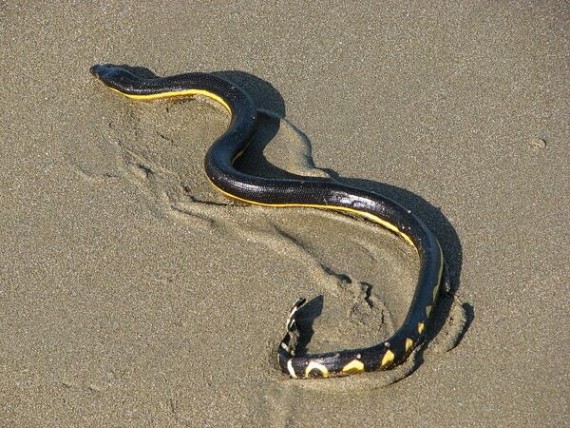 Sea snakes sometimes have to wait for freshwater from rainwater while in the ocean.(Photo : Twiiter Photo Section)

Hydrophis platurus the sea snake was found by biologists from the United States, France, and Australia the Wired reported Thursday.

According to information in the Proceeding of the Royal Society B: Biological Sciences, the scientists caught and examined over 500 snakes, so they could find out their survival methods during long durations at sea, and nowhere near freshwater.

"[The] Hydrophis (Pelamis) platurus, dehydrates at sea and spends a significant part of its life in a dehydrated state corresponding to seasonal drought", says the report. "Snakes that are captured following prolonged periods without rainfall have lower body water content, lower body condition and increased tendencies to drink fresh water than do snakes that are captured following seasonal periods of high rainfall... The new data based on field studies indicate unequivocally that this marine vertebrate dehydrates at sea where individuals may live in a dehydrated state for possibly six to seven months at a time."

The sea snake, which resides off Costa Rica's shores, consumes food it finds in the depths of the ocean as it lives most of its life in the ocean.

However, since the snake is not able to drink ocean water as it is not healthy for the sea snake's salt glands that rest of the snake's tongue it slurps up amounts of the resource without salt lying on top of the sea water after it rains a lot Wired reported. The snake also uses the glands to take out salt from food it eats the Wired reported.

As long periods of time can elapse between one rainfall and another, the snake is forced to wait until water comes pouring down from the sky again, but makes do with water it stores during its long stays out the open ocean water.