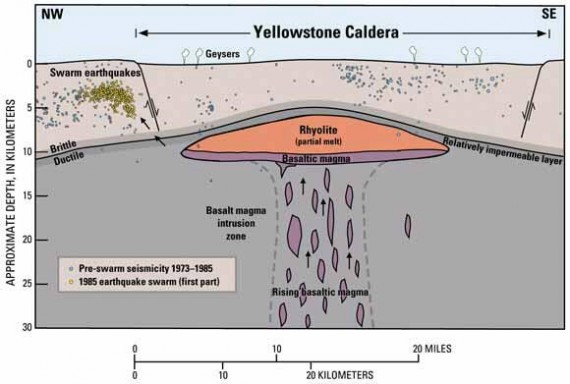 Scientists expect Yellowstone's supervolcano, the Yellowstone Cadera to remain calm for at least the next one to two million years.

"Yellowstone is one of the biggest supervolcanos in the world," Ilya Bindeman, an associate professor of geological sciences at the University of Oregon told Phys.org. "Sometimes it erupts quietly with lava flow, but once or twice every million years, it erupts very violently, forming large calderas, which are very large craters measuring tens of kilometers in diameter."

"If it happens again, and he says most scientists think that it will, he predicts such an eruption will obliterate the surroundings within a radius of hundreds of kilometers, and cover the rest of the United States and Canada with multiple inches of ash. This, effectively, would shut down agriculture and cause global climate cooling for as long as a decade, or more. A volcanic event of such magnitude hasn't happened in modern civilization."

The supervolcano has a continuous cycle where a cloud plume containing hot mantle, or a hot spot rises underneath the earth as the same time magna chambers or big amounts of liquid rocks spew out lava, dissolve, spurring big blasts tons of thousands of years after the cycle starts.

Several groups of volcanic craters have been created from the hot spot within the past 16 million years Phys.org reported.

"Our research of the pattern of such volcanism in two older, complete caldera clusters in the wake of Yellowstone allows a prognosis that Yellowstone is on a dying cycle, rather than on a ramping up cycle," Bindeman told Phys.org.

"Yellowstone is like a conveyer belt of caldera clusters. By investigating the patterns of behavior in two previously completed caldera cycles, we can suggest that the current activity of Yellowstone is on the dying cycle," Bindeman told Phys.org.

Bindeman does his research on a NSF Faculty Early Career Development Career Award that he received in 2009.