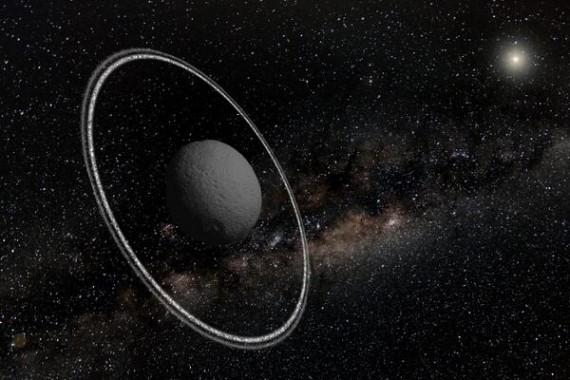 New scientific information released Wednesday and printed in the scientific journal Nature show evidence of two rings covered in ice surrounding a mini object known as a centaur, which belongs to an Asteroid classification.

The find which is named Chariklo, and travels in the middle paths of Saturn and Uranus  consists of an asteroid, and a comet National Geographic reported Wednesday.

"When I first heard of it, it was unbelievable," Joseph Burns, an astronomer at Cornell University in Ithaca, New York told National Geographic Burns did participate in finding the ring.

The rings measure four and two miles width wise respectively, the equivalent to seven and three kilometers in width, and 243 miles or 391 kilometers and 251 miles or 405 kilometers out of Chariklo's middle.

The rings are filled with a water ice mixture, and are thick, and shine glowingly similar to Saturn's circles National Geographic reported. Until 2008, Chariklo did not appear as illuminated.

Scientists came across Chariklo in 1997, which is one of a couple that exist in the world, and shift between two elements including an asteroid rock known to travel nearer the earth compared to Jupiter, and a comet with ice known to exist far distances from Neptune.