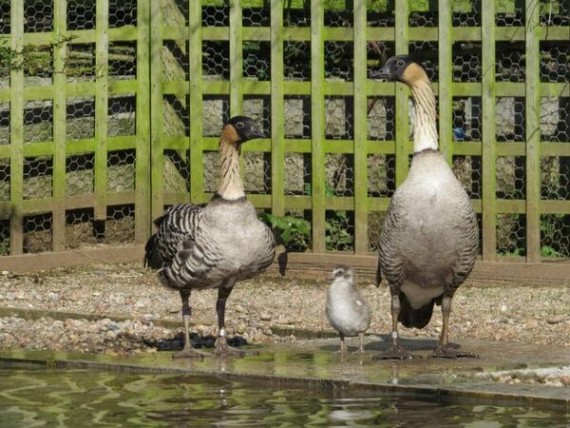 Two geese with one of their goslings.(Photo : Twiiter Photo Section)

Two Hawaiian geese on the verge of extinction appear to have made Oahu, Hawaii  their new residence television station KHON 2 reported Wednesday.

"Nene on Oahu is exciting progress for, and an expected part of, the recovery process for this endangered bird," Barry Stieglitz, Refuge Supervisor for the Hawaiian and Pacific Islands National Wildlife Refuge Complex told television station KHON 2. "Historically, nene occurred on all or most of the major Hawaiian Islands before and during Polynesian colonization. We hope that one day, nene populations will once again occur on all the major Hawaiian Islands," Stieglitz told KHON 2.

The geese have also given birth to three babies in the James Campbell National Wildlife Refuge by Kahuku, Oahu, Hawaii KHON 2 reported.

"It's very exciting to have them here and to have nested and to have raised goslings in an area where they haven't been in so long is very historic," Annie Marshall, a biologist and person knowledgeable about nenes told KHON 2.

"This is the first time that we have seen nene here since westerners started documenting the bird and native wildlife population. We don't plan to move any birds here. We believe that they will find there way here naturally," Marshall told KHON 2.

Four eggs originally came in February, with three breaking open March 13. According to researchers, the birds will probably return to Kauai where they were before.

"This family was originally on Kauai," Marshall told KHON 2. "The male and female later moved with some goslings from Kauai. They were near the airport and that was considered a problem because people worried about plane strikes. They were moved from there and taken to Hawaii Island. We think that they were probably flying back to Kauai, but ended up stopping here and doing very well and so they stayed," Marshall told KHON 2.

The species known as a goose, or nene almost became extinct at the beginning of the 1950s, which at the time saw only 30 throughout the whole world throughout the entire island.

"The nene geese are impacted by mammal predators that were introduced to Hawaii for various reasons, such as feral dogs and cats, mongoose and rats," Aaron Nadig, a fish and wildlife biologist told KHON 2.