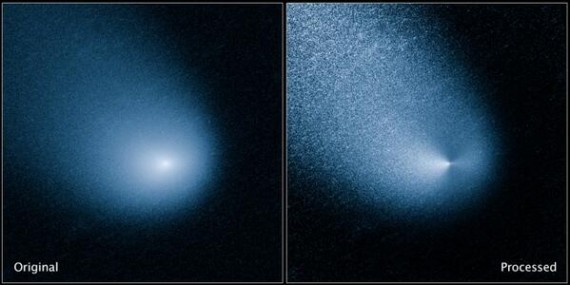 Shown are photos of the Comet Siding Spring captured by the Hubble Space Telescope, its latest find.(Photo : Twitter Photo Section)

New images from the Hubble Space Telescope show dust particles coming from a comet that are predicted to fly by Mars in 2014 Space.com reported Thursday.

The telescope captured the photo March 11, which shows the Comet Siding Spring apparently originating from its center or nucleus.

"This is critical information that we need to determine whether, and to what degree, dust grains in the coma of the comet will impact Mars and spacecraft in the vicinity of Mars," Jian-Yang Li, of the Planetary Science Institute in Tucson, Ariz., said in a statement Space.com reported.

The photos were taken of the comet March 11, which is expected to approach Mars Oct. 19, but fall short of reaching its surface 84,000 miles, or 135.185 kilometers, and the equivalent to a third of the length from the Earth and the moon Space.com reported.

Hubble also captured photos of the comet Jan. 21, and Oct. 29, the evidence is assisting scientists find out more about the comet including the point at which its nucleus rotates, and how fast the particles are exiting the comet.

Photos of dust particles from comets is not the only discovery Hubble has made.

The telescope located extraterrestrial clouds on two exoplanets according to Fox News, or space bodies that go around a star other than the sun according to information from Observatoire de Paris

The planets go by the names Super earth and Warm Neptune, and teach scientists how to group conditions similar to Earth, based on what they see Fox News reported.

The photo of the stars show the internal organs of a Tarantula Nebula National Geographic reported. The collection of stars categorized as a cosmic arachnoid, and named Doradus 30 spans 600 light years in outer space.