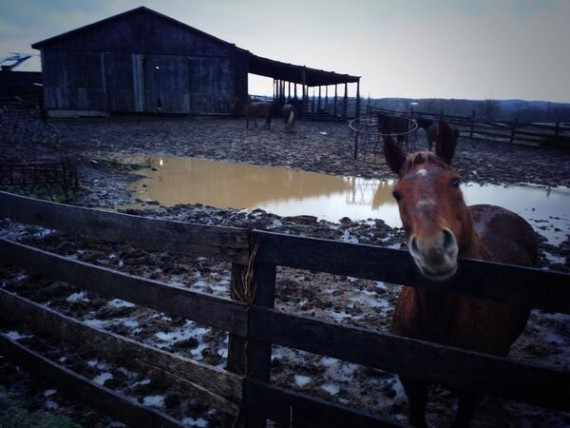 A horse on the Kentucky farm.(Photo : Twiiter Photo Section)

Forty-nine dead horses on a Kentucky has sparked an investigation and could lead to animal cruelty charges being filed.

The horse bodies, some of which still donned their halters were found on Larry Browning's Pendleton Farm in Kentucky according to police USA Today reported Tuesday.

Fifteen other horses were also discovered very thin on the property. Ribs on certain ones also showed out of their skin.

Browning, who has sold horses from his farm for over 50 years aimed to sell the horses to individual owners or slaughterhouses in another county on or before May.

Kentucky State Police cited Browning on 49 counts of not disposing an animal carcass within 48 hours, and 15 counts of animal cruelty USA Today reported.

The horses also reportedly had a scarce amount of hay to consume, with a particular amount settled in water puddles.

The Pendleton County Animal Shelter is not able to keep the horses which therefore led them to foster care in Kenton County, Three dozen remained on the property according to Scott Pracht, an equine investigator at Pendleton County USA Today reported.

"They've charged me with abuse of horses, which is not true. There was hay at that ridge at the time. Every neighbor will vouch for I feed my horses good. I don't know why you wouldn't feed them, because if you don't, you don't get anything for them," Browning told USA Today.

"People drop off a lot of thin horses there. I took in some horses from the animal humane society called Speak Up For Horses in '11 and ever since then, people think I'm a drop-off. They've dropped off horse after horse here, but they don't have anything else to do for them," Browning told USA Today.

"I'm going to sell them to a boy up in Bracken County. He's going to take them home and I plan on selling the farm move away from all these two-faced do-gooders around here," Browning told USA Today.