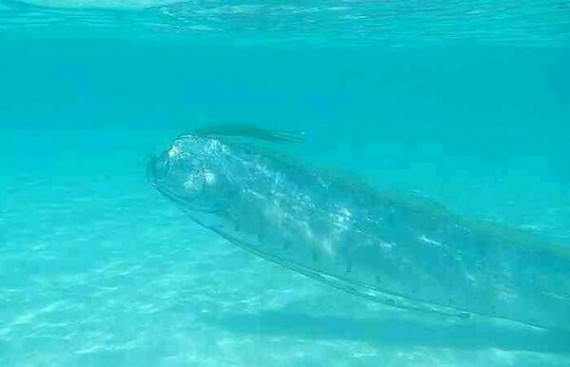 An oarfish was spotted closer to the surface of the water.(Photo : Twiiter Photo Section)

Ocean visitors were able to capture the rare sight of a 36-foot-long or 11 meter oarfish along the shores of Baja, Mexico Discovery News reported Tuesday.

"Deep-sea fish living near the sea bottom are more sensitive to the movements of active faults than those near the surface of the sea." Kiyoshi Wadatsumi, director of non-profit earthquake prediction research organization e-PISCO told Discovery News.

The oarfish are usually hard to come by and see as they swim at depths of 3,000 feet or 915 meters.

There have been many sightings of oarfish washing up on shores puzzling officials especially when other species were found inside Discovery News reported.

Scientists found the worms in the species intestine Oct. 13 after swabbing tissue samples from the creature's gills, intestine, stomach, spleen, and gallbladder to become more knowledgeable about the species.

Scientists discovered another oarfish five days later on Oct. 18, measuring 14 feet, and fully intact. The massive creature needed a minimum 15 people to heave it up into the air so it could be sent for testing CNN reported.

The discovery was a rarity however because the animal's condition is unusual for species who endure what the whale went through as biologists usually find them charred or bitten by other sea life.

The species, a female saber-toothed whale weighing 2,000 pounds, and known to reside in waters off Alaska was all in one piece, and clinging to life from some shark bites.

Another fish washed ashore off the spanish village of Villaricos August 22 that is believed to be an oarfish or thresher shark BBC News reported.

News of "sea serpent" swept the Internet based on pictures from Spanish publications the week prior NBC News reported. The remains appeared on the Luis Siret Beach in the Andalusian Village of Villaricos according to Ideal, a local publication in the area.