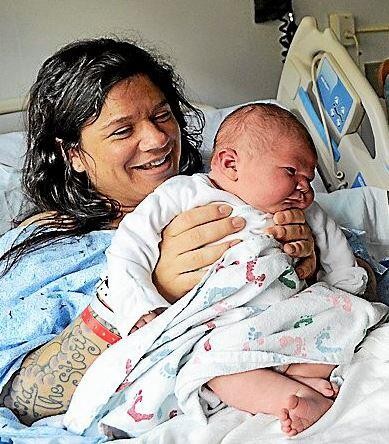 A Philadelphia couple's baby weighed 13 pounds Monday when it popped out of the mother two weeks late making it only right for its name to be Waldo The Times Herald reported Thursday.

"I've been here 11 years and he's the biggest one I remember," Mary Wascavage, director of public relations  at Delaware County Memorial Hospital told The Times Herald.

Mother Danielle Dwyer was taken to Delaware County Memorial Hospital in Drexel Hill, Pa after she was in labor longer than was originally anticipated The Times Herald reported.

Doctors and other medical staff originally intended for Waldo to be born via caesarean section with  Anne Londergan serving as a midwife at the Birth Center in Bryn Mawr, Pa.

"We both love the books," Danielle Dwyer told The Times Herald.  "We grew up with 'Where's Waldo?' books as kids and liked the name. And we don't really know any other Waldos."

"The doctor who delivered the baby said it was the biggest baby he ever delivered. No one gave us a warning the baby would be this big. They guessed it would be big, maybe 9 pounds. I guess it's really hard to tell. I knew it was a big boy, but not this big. I was surprised and happy he was healthy and well. My husband and I were both 9-pound babies," Danielle told The Times Herald.

"He seems so peaceful, but gets a little upset if I move too much while I'm holding him," Daneille told The Times Herald.

Father Brian Dwyer is ready for the new addition to to the family.

"It's time for a new Waldo," Dwyer told The Times Herald. "If one child can own that name, it's Waldo James Mysterious Dwyer. It's been a wild ride. We didn't know he was going to be this big."

"It's strange. He was born on 4-14-14 and almost weighed 14 pounds. And he was born under the lunar moon. It's like zero dark thirty. He will have a cool birthday. He's a mystery to us and here he is," Brian told The Times Herald.