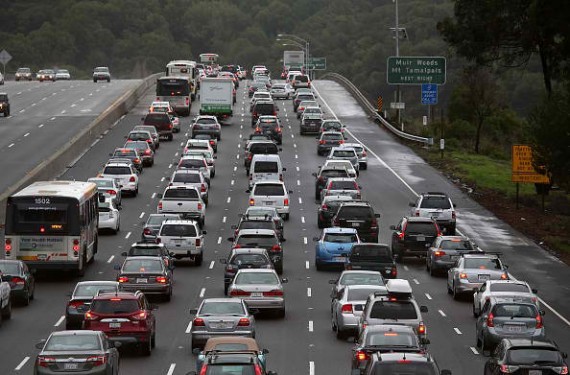 Good news: more Americans have jobs with the economy growing.

Bad news: more Americans with jobs are commuting and that makes traffic worse.

The economic recovery of the United States has brought back with it traffic congestion that keeps drivers stuck on roads for an average of 42 hours a year and cost the economy $160 billion in 2014.

Citing a study by the Texas A&M Transportation Institute and the traffic monitoring firm Inrix, the Washington Post reported that the country's road infrastructure will likely be congested with the population expected to add 70 million more people up to 2018.

The Post added that the report supports a recent data release by the U.S. Transportation Department that shows Americans drove a record 1.54 trillion miles in the first half of this year to beat 1.5 trillion miles set in 2007.

The paper noted that the report shows that expected traffic relief from telecommuting, the movement of people back to cities, and a decline in millennials seeking driver's licenses may not be forthcoming.

Los Angeles has six of the 10 most congested highways in the U.S. while Chicago and New York each have two, where the drivers lose an average of 84 hours in traffic a year, the report said.

In addition, the report said that the increased traffic is also a result of the creation of urban hubs around big cities leading to employees needing to travel far to get to their workplaces.

In another story, the Wall Street Journal reported that the return of traffic is a side effect of economic growth as people commuted less when they lost their jobs during the height of the recession in 2008 and 2009. The paper said the traffic in 2014 is the worst since 1982.

The Journal noted that the recent drop in oil prices is not factored into the study given its limited impact on regular commutes.

"When gasoline prices are down, it doesn't necessarily mean that people say, 'Oh, gosh, let's get in the car and drive around.' That's not typically the reaction that people have," said David Ellis, a research scientist at Texas A&M, as quoted by the Journal.