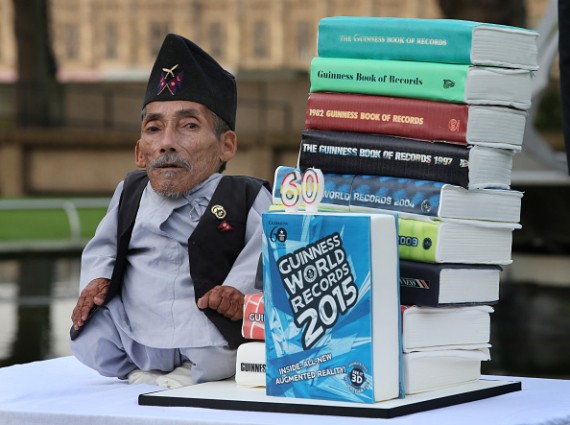 Chandra Bahadur Dangi was the shortest full-grown person in the world, standing at 1 foot 9.5 inches and weighing 31 pounds, according to The Huffington Post.

The holder of two Guinness World Record titles — world’s shortest living man and the world’s shortest person ever recorded — passed away at the age of 76 at Lyndon B. Johnson Tropical Medical Center in the U.S., according to the news outlet Kathmandu Post.

“Today, our circus is flooded with tears at the loss of the world’s smallest man…whom we lovingly called Prince Chandra,” family friend and owner of India’s Rambo Circus, Sujit Dilip, told the Daily Mirror.

“GWR would like to express its sincere and heartfelt condolences to Mr. Dangi’s family in this difficult time,” the statement read.

“He will be remembered forever as an iconic and extraordinary record holder.”

Dangi reportedly had a condition known as primordial dwarfism, with bones and organs that were proportionally smaller than those of a person standing at an average height. Dangi was recognized internationally for being “unusually fit” and even traveled to London to meet the world’s tallest living man last year.

"It's been a lifelong dream to travel and becoming a Guinness World Records title holder has enabled me to do that," Dangi told The Telegraph.

“I'm honored to be in London, I've always wanted to visit and the fact I get to meet Sultan is special. It makes me extremely proud to represent Nepal all around the world. I'm extremely humbled by the support I receive."