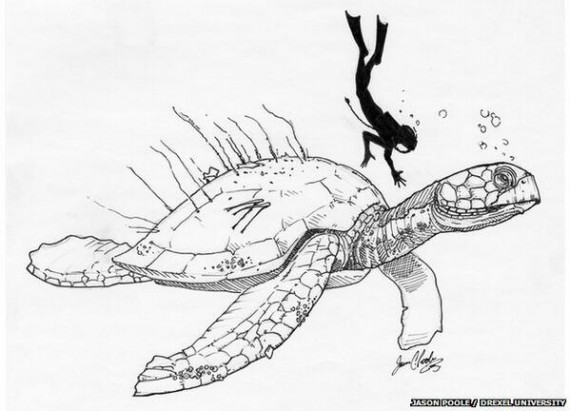 Both bone fragments of a sea turtle body have been found.(Photo : Twiiter Photo Section)

A fossil hunter's object he found in the grass by a creek in Monmouth County, N.J. turned out to be part of a sea turtle's arm or leg Live Science reported.

"I started seeing the little holes in the bone that the blood vessels go through," Gregory Harpel, a beginner fossil hunter said in a statement Fox News reported. "I thought maybe it was a dinosaur of some sort." Harpel found the fossil in 2012.

Harpel originally believed the piece of history was a stone, however other factors allowed him to come across the find unplanned, and unexpected.

"He said offhandedly. Maybe we ought to take it to the Academy [of Natural Sciences] and see if it fits," Jason Schein, assistant natural history curator at the New Jersey State Museum told Live Science. "Dave was half joking, thinking that could never, ever happen."

And the Academy of Natural Sciences they did where they combined a couple pieces of  ancient bone together to create the humerus bone. Harpel's piece was found to have gone with the species elbow, and the part the Academy had its shoulder Live Science reported.

One part of the humerus gave archaeologists sufficient data to conclude that the bone could be called Atlantochelys mortoni after over 160 years of it being the only evidence of the turtle.

The humerus's first bone was discovered 163 years ago and possibly longer until Harpel made his discovery.

"Unfortunately, things were not as well documented in those days," Ted Daeschler, associate curator of vertebrate zoology at the Academy told Live Science.

"It's all part of painting a picture of the past," Daeschler told Live Science. "I think those are the really important scientific discoveries here."

According to Live Science, initial information about the fossil dates back to 1849 when its classification to the sea turtle was determined.